A note on the photos

Most but not all of the pictures on this blog can be clicked though: if you click on them they will take you to a high resolution version on the
SmugMug site of one of the Sons. Use the back button to return to the blog.

Calling this a wilderness walk is slightly exaggerated since apart from 5km of creek-walking in the middle the 33km route follows old forest and farm roads, most of which are well-maintained. Moreover, a substantial section is through abandoned farmland - we harvested lemons and strawberries on this trip. But it's a lovely walk with a variety of forest types, and the diversity and abundance of birdlife was truly impressive. As a bonus, it's downhill all the way.

Our trip was fitted into a working week as one member of the party works weekends. We drove the five hours to Bellingen on Monday afternoon, arriving just in time for a good dinner at the Diggers Tavern and settling into the truly beautiful Bellingen YHA (aka The Belfry).

We awoke to a perfect blue sky, and perfect view across the Bellinger River valley to the Dorrigo Plateau,  skeins of mist rising from the river and surrounding forest. As we sat in the garden waiting for the 7am opening of the nearby bakery a pair of Green Catbirds flew in to take a quick drink from a Buddha's head fountain. While often heard in the bush around Sydney, somewhere between a caterwauling tomcat and a crying baby, these bowerbird relatives are rarely seen. But here they seemed perfectly unconcerned by our presence. 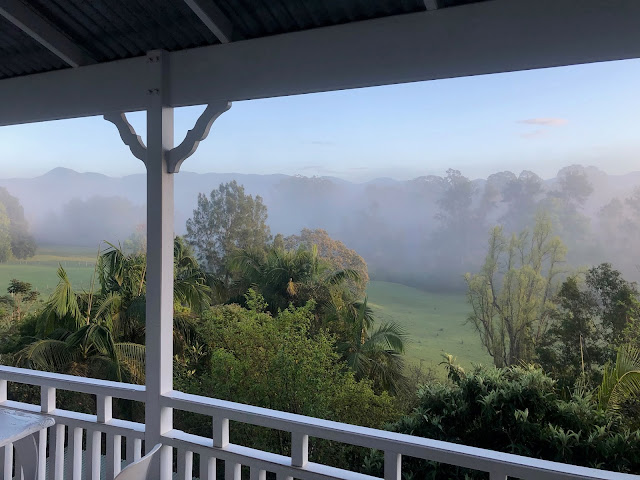 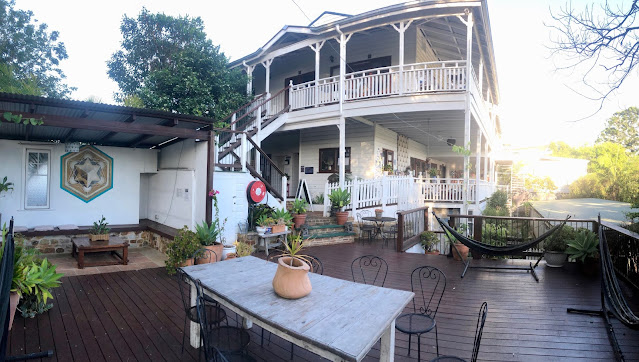 Excellent coffee and croissants at the Hearth Fire bakery, and purchase of two loaves for the trip, was followed by a gear inspection. This revealed we were short one tent - a basic error. Calls to local acquaintances failed to raise a substitute, so we were forced to make a detour to Coffs Harbour where Anaconda had a serviceable little dome tent for $53! As a result of this unforced error, and the already 1.5 hour drive to the start of the walk, it was 11.45am when we finally left the car near Point Lookout and headed down Robinson's Knob fire trail. 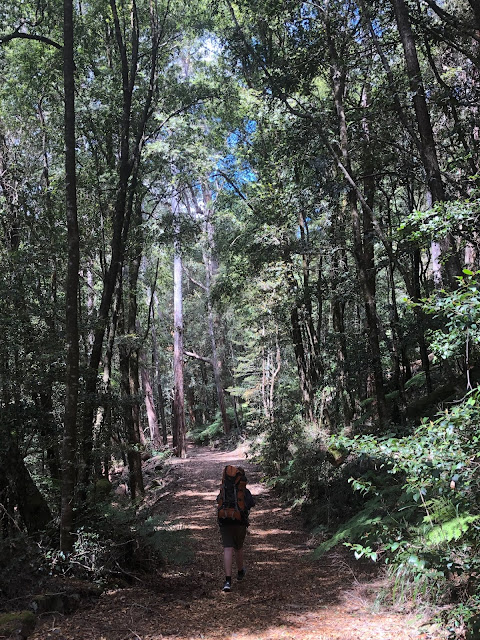 The walk starts at 1350m, high on the New England Tablelands and in the first few hours it drops 1100m to the headwaters of the Bellinger River. We started walking through southern beech forest (Nothofagus) which I was not expecting. After a couple of hours walking steeply downhill on a broad, well-maintained road we turned down Grasstree Ridge vegetated by groves of Xanthhorhea both tall and low, a disused road running for 8km past an old mine and onwards to Sunday Creek, a tributary of the Bellinger. The trail is well-named, as there is a dense understory of these particularly beautiful grass trees - tall, rarely branching and with a knobbly trunk like a banskia. 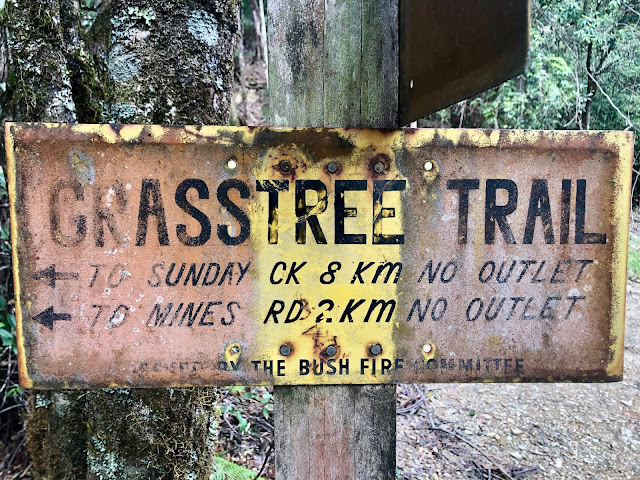 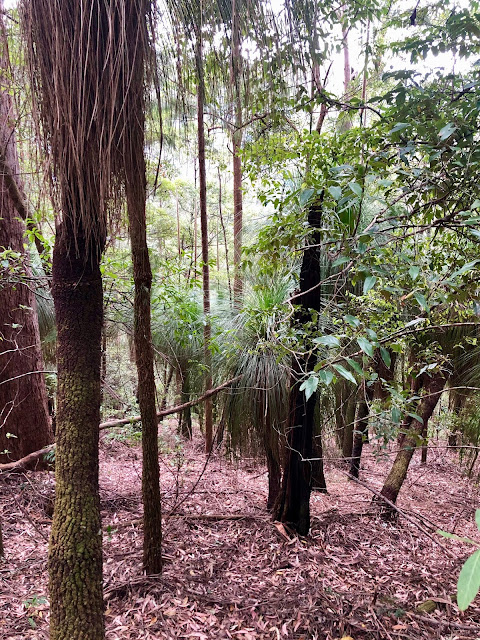 The Grasstree Trail is still in remarkably good condition, given how steep it is and that it has not been used for decades. There are no washouts, no landslides, just a few tangles of vine across the road, mainly at the start and finish, and remarkably few fallen trees, so you can make a good pace. But is is certainly steep! Because of this much of the road is cut deeply into the hillside, and it would be very hard to lose even if it were more choked with vegetation.

Having started so late I promised my companions we would stop at the 700m contour or 5.00pm, whichever came first. We reached the 700m line at 4.30, and set up camp in a saddle between two knolls, with the tents in a row on the flat section of track. We had to be as  economical with water, as it was a dry camp, but we had enough to leave 1/2 litre each for the morning, and after a dinner of tuna couscous and some chocolate we were in bed by 8.30pm. 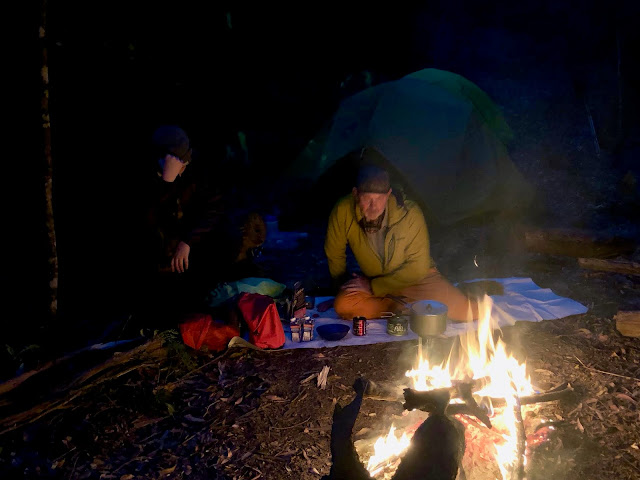 In the morning we ate scrambled eggs with  magnificent olive sourdough bread from the Hearth Fire bakery, then removed traces of our fire. We had dug a pit in the middle of the track and cleared the leaf litter for a couple of metres. Once the pit of cold ashes was covered with soil there would be little trace of our passing. 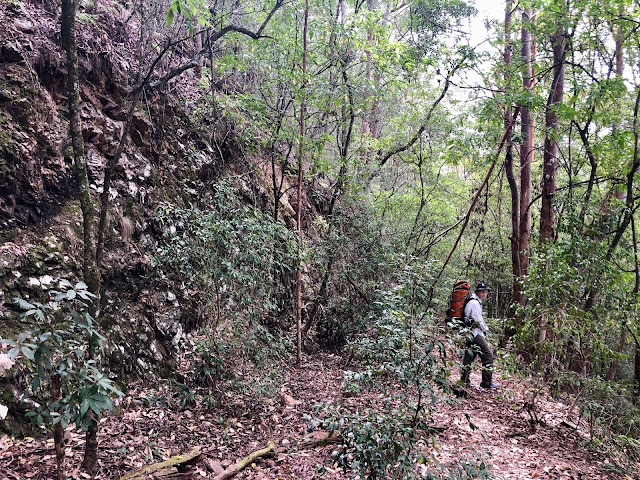 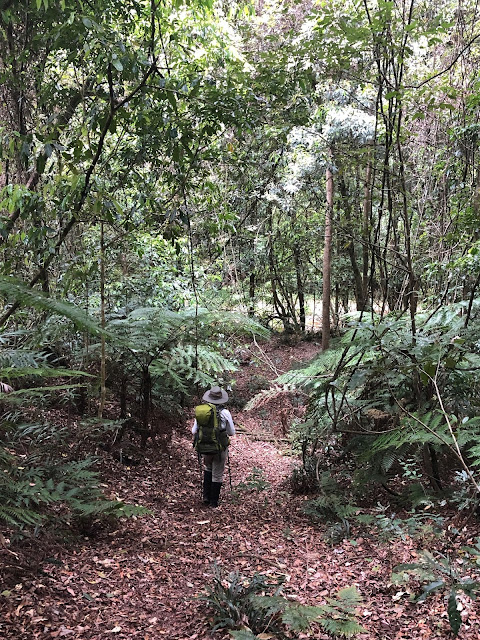 The trail continued much the same as the day before, eventually slipping off the east side of the ridge to descend in a series of bends to Sunday Creek. The campsite at Sunday Creek is very pleasant, with a clear area of soft leaf-litter and a big fire-circle. It would be the obvious place to stop at the end of Day One if you had started at a reasonably hour, and would be about 6 hours from the start point for a group of experienced bushwalkers. 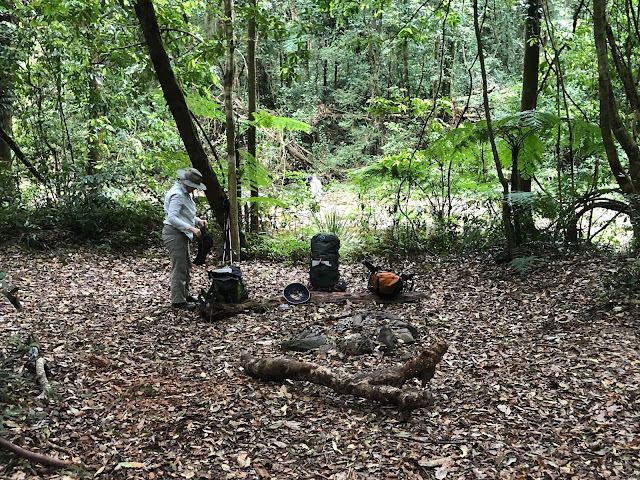 Sunday Creek itself is broad with a bottom of boulders and gravel, soon joined by Platypus Creek to form a more substantial creek, but still broad and shallow and descending very gradually towards the main river. The banks are dense rainforest with plenty of lawyer-vine so the only reasonable option is to walk in the creek, which was reasonably straightforward with only a few thigh-deep wades. 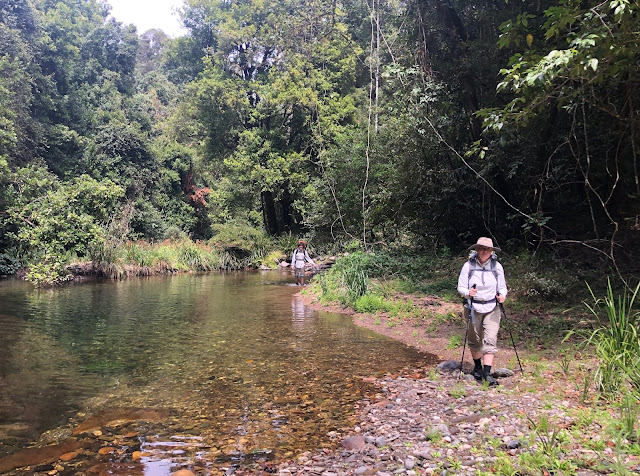 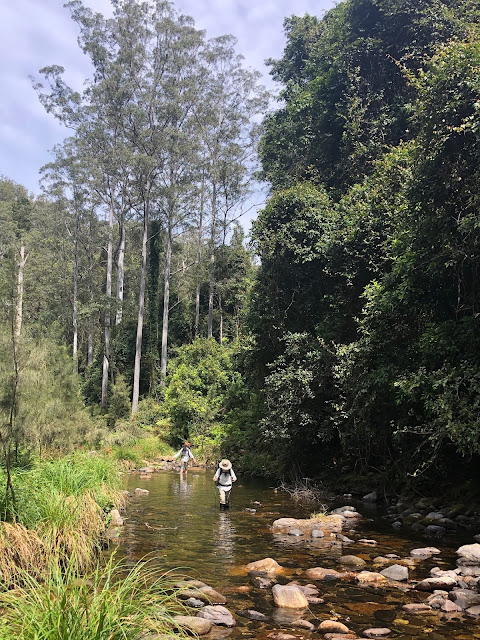 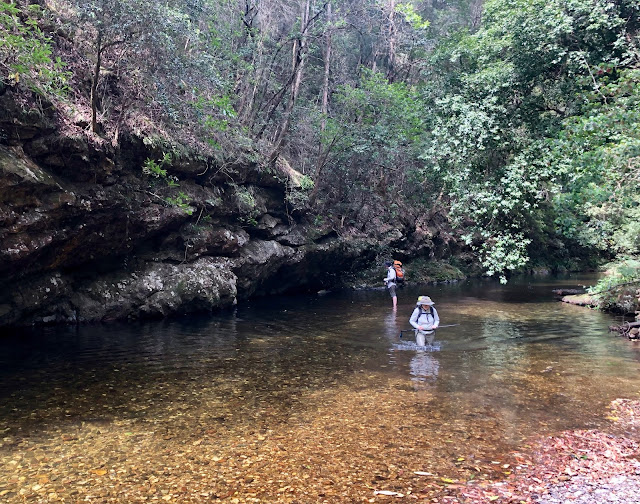 We had read in a previous trip report that the whole area is a mass of Stinging Tree (gympie-gympie) so one of my companions had packed her full bush regenerator gear of thick gloves, secateurs and folding saw to cut a path through the jungle! None of this saw any use, except the saw for cutting firewood and the loaf of bread! We saw exactly 2 stinging trees in the whole trip, not large specimens and well off the track. However, we saw thousands of tobacco plants (Solanum mauretanium), a common invasive weed that someone could mistake for stinging tree, especially in the paranoid mindset induced after being stung by the real thing! But they are very easy to distinguish once someone has pointed out the difference, and the tobacco plant grows abundantly in disturbed areas around Sydney, so many people are familiar with it. In fact, we were in much more danger from being stung by another Urticaceae species, the European stinging nettle, carried up the river from the abandoned farms by birds and bushwalker's boots.

We did, however, have a close encounter with a large and healthy red-bellied black snake, reported by the person closest to it to have smiled at her before disappearing into a tussock of Lomandra.

A couple of kilometres of creek walking brought us to the banks of the Bellinger river where we had lunch. The Bellingen bakery's excellent nutty tasting Rye Loaf with tomato, cheese and the very last of the butter. The road starts a couple of kilometers further downstream, so we crossed to the far bank and cut across the river flats there, and then along the bank on gravel and small boulders, until we picked up Darkwood Road. The rest of the walk simply follows the old road along the river until it becomes open to traffic. In their usual manner the Lands Department have deleted the middle section of the road from the topo maps, but in fact it is still there and clearly still used by National Parks vehicles. 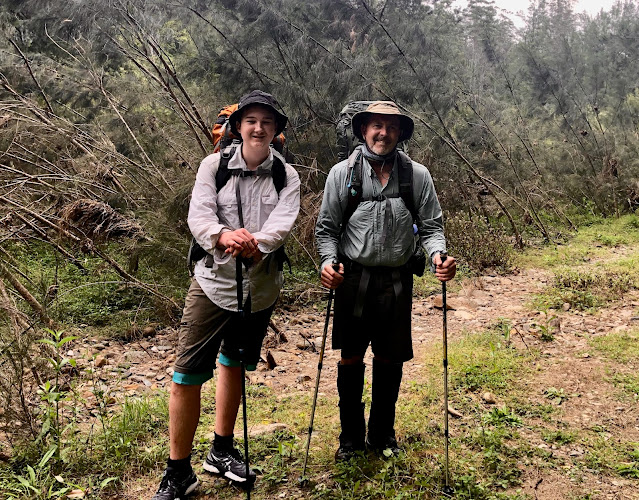 The next section of the walk was a little disappointing - a well-maintained dirt road with roadside vegetation of invasive weeds - lantana thickets, tobacco plant and so forth. There was some reforestation work evident. 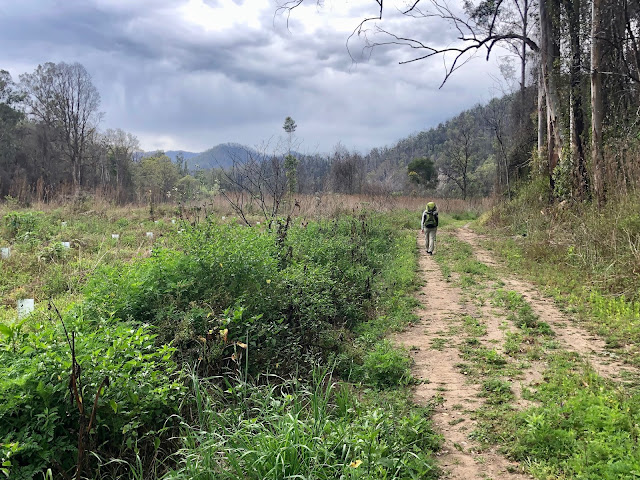 Like all well-engineered roads this one avoided the river when possible and headed into the hills, snaking up and around the heads of  gullies. We were happy to arrive at the turn off to the first plausible riverside camping area, labelled 'Woods camp' on the map. This was, indeed, an old farm clearing in a bend in the river, but there was no cleared area to camp and the whole area was a mass of brambles, stinging nettles and tobacco plant. On the plus side, there were some lemon trees carrying fruit, which turned out to be the edible, not too sour kind, and  birds love this kind of country with dense cover and abundant food - I immediately saw a Crested Shrike Thrush and a pair of Rufous Whistlers. We found an area of of tangled grass reasonably free of spiky and stingy things to put the tents on and crushed down a path through the nettles to the river bank where we found some a decent spot to spend the evening. Time for a swim. 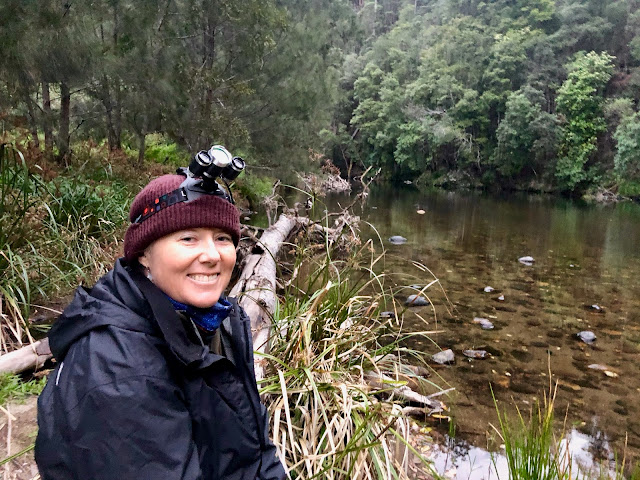 Next morning it was scrambled eggs again, and rye bread, sadly without butter. Then we set off up and up the hill to walk along Darkwood Road, passing abandoned farm buildings and a work crew busy removing asbestos and demolishing them. This was our warmest day, and in the open country walking in full sun through old, overgrown fields we felt pretty hot. Soon, however, we forded the river once more and the road started to follow the river. This section of the walk was lovely - a green road through shady forest running a few metres above a beautiful, rocky river. It reminded me of some of the low altitude long distance walking tracks in France - a wild river valley amongst the farming country. 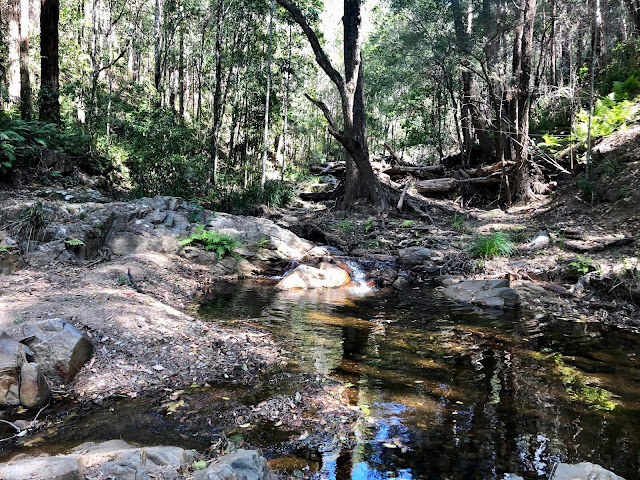 We had arranged for the helpful people at Bellingen Canoe Hire to meet us and drive us back up to the car, and as the meeting time was fast approaching I pushed on ahead of the others and arrived at 1.00. The last point you can drive to on Darkwood Rd is where the road is shown ending on the topographic map. It's easy to see when you arrive - a bridge has been removed leaving only a concrete pier in the middle of the river and after that ford there are properties along the road. My companions followed at their own pace stopping for one last afternoon tea break and managing to disturb a few more juvenile brown snakes from sunning themselves on the track, and when I got back with the car at 5.00 I found them sitting in camping chairs drinking tea and eating Arnotts Shortbread biscuits - they had been befriended by one of the local property owners. All that remained was to drive back to the YHA for a shower and another fine meal at the Diggers Arms. 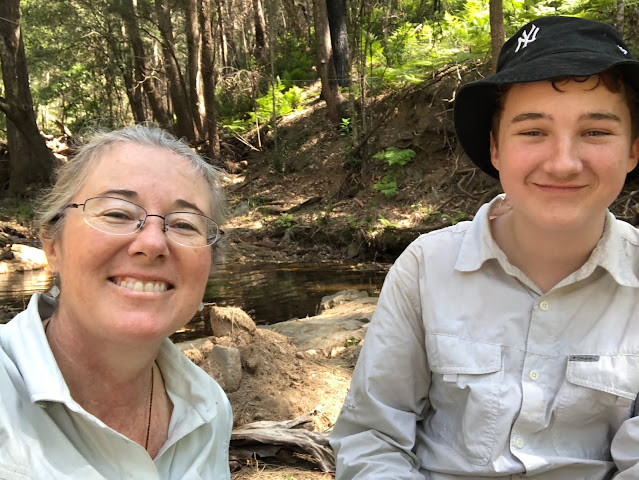 Next morning we awoke to another brilliant blue day and brilliant view, and fortified with first-rate coffee and pastries from Hearth Fire it was time to head home. We had conquered the New England Wilderness Walk and lived to trek another day. 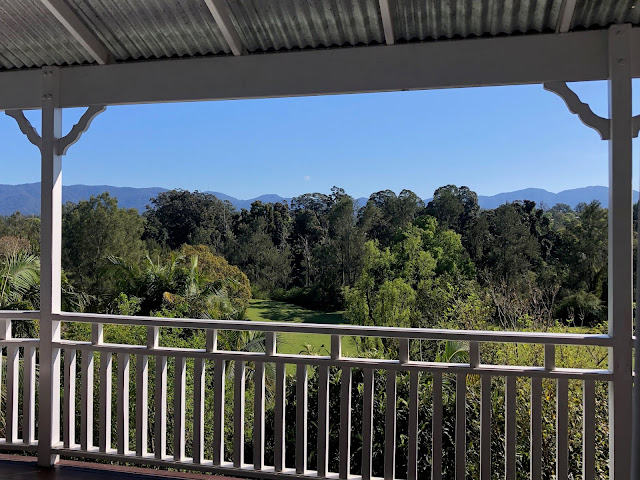 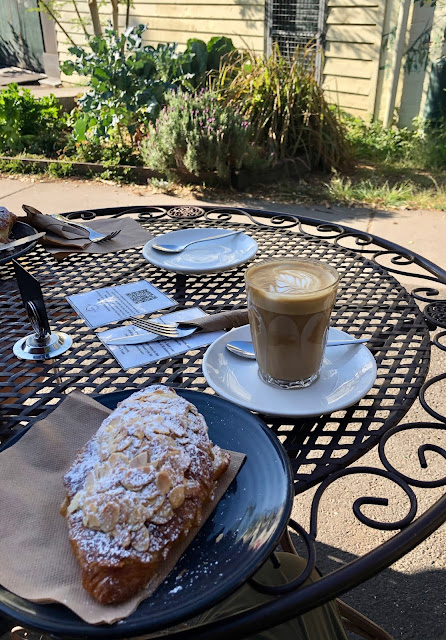 Posted by Paul griffiths at 6:40 PM